The History of Wiefferink

The Wiefferink company was founded in January 1956 by Henny Wiefferink. In Denekamp he started in a vacant chicken shed repairing shoes and a saddlery. Later, mainly coverings, mail bags, zinc pieces for Rijkswaterstaat for the Delta Works and sun blinds were made and assembled. In all these activities, the necessary repairs of, among other things, coverings, tents and even garden chairs were added. 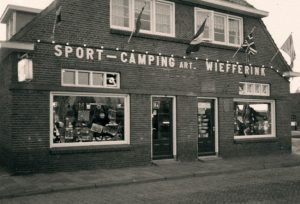 Because the products became larger and larger, the chicken shed soon became too small and a larger workshop on the Brinkstraat in Denekamp had to offer a solution, after which in 1973 a new production hall with offices of 36×14 meters was put into operation on the industrial estate.After a few years, this hall turned out to be too small again and an extension was realized that was used as a showroom and as a production area

Due to health problems of Henny Wiefferink, the company was sold in 1987, whereby the sailmaking company with the industrial clothing and the sun protection department are separated from each other. In 1988, an important step was taken for Wiefferink for the future by responding to the request from a sailmaker customer, transport company Steghuis, to make a cover for a manure silo for one of the owners. Wiefferink then designed a silo hood and became one of the market leaders in the Dutch market for years and later in the global market. As a result of a covering obligation for manure silos in the Netherlands, thousands of silos were covered by Wiefferink in the Netherlands, which of course also took care of the assembly.

In the meantime, Wiefferink had purchased an additional hall next to the Kloppendijk hall on the Hanzeweg and rented another hall on the Kloppendijk. Because working at different locations was far from ideal, they decided to move to Oldenzaal, where in 1990 a hall with two floors was built for production, a confection and the necessary offices. Due to the ever-growing order portfolio, this hall was expanded again in 1992 and 2005.
At the end of the nineties of the last century the market for silo coverings in the Netherlands saturated because almost all silos were covered and meanwhile the necessary manure bags and foil basins had been delivered.Together with BTG from Enschede, to which company Wiefferink supplied gas collection constructions of foil for, among other things, coffee plantations in Latin America, an idea was developed to adapt the already covered silos by double covers to extract biogas from the stored manure.This turned out to be a great success, because in Germany in particular there was an incentive to generate green electricity through biogas.

The urge to expand continued and forced Wiefferink to rent another hall in Gildehaus Germany.
In 2008 they built a large production hall  in Wykroty in Poland, where employees who had been trained in the Netherlands are still in charge. In recent years, Wiefferink’s field of operations has been constantly expanded and products for the agricultural, biogas, water treatment and industrial markets are supplied all over the world and where necessary also assembled.

This is off canvas menu widget area. To enable it add some widgets into Appearance – Widgets – Menu Section, and go to Customizer – Main menu to set the icon position.

Wiefferink at the EuroTier Hannover

Wiefferink enters into a partnership with Karmijn Kapitaal and Delta Particaties

Completion of some nice ‘landmark’ projects